A window on contemporary Arab culture. That’s what is promised at the second ever Shubbak Festival, a fortnight-long event which opened last week. Running until 6 July in venues scattered all across London, this festival celebrates the visual arts, music, and Arabic translations and literature.

The first Shubbak Festival in 2011 was a great success and it has now become a biennial event. We’ve selected a handful of this year’s events END_OF_DOCUMENT_TOKEN_TO_BE_REPLACED

When London made its bid to host the Olympics, one point was made over and over. London is a city of the world. London is a multicultural city. More than 300 languages are spoken in London. Come to London, and you’ll find the world. And so on.

And when is the worst time to fall flat on your face? When everyone in the world is watching. END_OF_DOCUMENT_TOKEN_TO_BE_REPLACED

London has a sizeable Arabic population, and a few areas of high density (the area around Edgware Road is the best known, with a long established Arabic community). So it’s surprising to find out that the Shubbak festival this month is London’s first ever Arabic arts festival.

The festival of contemporary Arabic arts will take place in 30 different venues across the city, and encompass literature, film, visual art, music, performance and discussions – and promises to be a fascinating window onto Arabic culture for all Londoners, Arabs and non-Arabs alike.
END_OF_DOCUMENT_TOKEN_TO_BE_REPLACED

The eagle-eyed following events in Libya will have noticed that not all news sources agree on how to spell the name of the man who has ruled there for 40 years. Go to the BBC and you will see Muammar Gaddafi mentioned. The New York Times calls him Muammar el-Qaddafi. CNN or Forbes will tell you it’s Moammar Gadhafi, while AFP talks of Moamer Khadafi. Certainly this bothered the Atlanta Journal-Constitution which asked on Friday “Why the many variations of Moammar Gadhafi’s name?”
END_OF_DOCUMENT_TOKEN_TO_BE_REPLACED 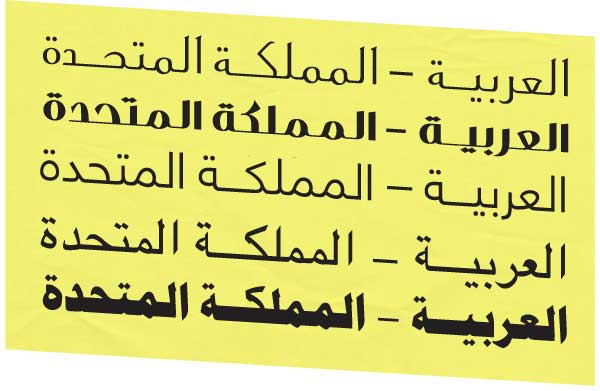 The business demand for any particular language can ebb and flow but, perhaps not surprisingly, one that’s busier than ever is Arabic. After all, Arabic is the official language of 26 countries, the first language of nearly 300 million people and a second language of nearly 280 million more. Our studio often find themselves working away on several Arabic typesetting projects at any given time. Given this expertise, I’ve been reflecting on the broader history, my pick of professional Arabic fonts and how the field is developing.
END_OF_DOCUMENT_TOKEN_TO_BE_REPLACED

Browsing the internet, I came across an interesting book review of “In a Fertile Desert: Modern Writing from the United Arab Emirates”. As the title implies, this is a collection of short stories from the Arabian Gulf, specifically the UAE, translated into English. END_OF_DOCUMENT_TOKEN_TO_BE_REPLACED

A language school based in Dubai are planning to make use of Twitter to bring basic Arabic language to a worldwide audience.

Followers of the Eton Institute will get a daily lesson, containing an English transliteration of an Arabic phrase. END_OF_DOCUMENT_TOKEN_TO_BE_REPLACED

I’ve mentioned before that I am a big fan of Charlton Athletic football club and the past few weeks have been a real rollercoaster for us fans. For a while I thought my separate worlds of football and Arabic translation would be brought together as Dubai based Zabeel Investments made an “indicative offer” to buy the club. Following the take-over of Manchester City by the Arabic group ADUG, it’s no wonder fans’ thoughts turned to Fantasy Football transfers we could expect to see arrive at the Valley.

In the end the deal did not go through as Zabeel are looking to concentrate on investing in property and tourism nearer home. It all made me think about how, in this time of world economic gloom, oil rich Middle East companies look set to try to diversify.

In the United Arab Emirates alone, there is currently around £200 billion worth of active construction projects while the Dubai International Financial Centre aims to massively expand the financial sector with tax, rent and regulatory breaks. Meanwhile the Palm Islands are a massive real estate and tourism development – the largest land reclamation project in the world, increasing Dubai’s shoreline by 520 km. All of this has made the United Arab Emirates one of the fastest growing economies in the world, with some estimates putting GDP growth in 2006 at a staggering 35 percent.

The vast sums of money are not restricted to the Arab world as business opportunities are sought out around the world. So we see Barclays bank raising £7.3 billion from Middle East investors. Other famous names that have seen an influx of Arabic capital include P&O, Aston Martin and Madame Tussauds.

In these times of doom and gloom news stories, it’s no wonder that such growth, investment and let’s face it, plain cash, is catching people’s attention and many other companies have their eyes set on pulling in some of that investment.

All of which probably goes to explain why we have been inundated with Arabic translation and typesetting over the last few weeks!